In Which I Praise Daniel Pinkwater

Daniel Pinkwater is a genius—admittedly a frequently misused word but, in this case, entirely appropriate. 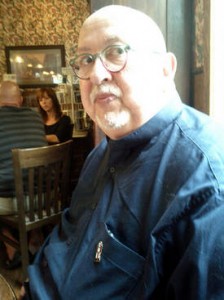 Pinkwater is a prolific author of what are ostensibly children’s books. His books, now numbering around 200, span the range from picture books to chapter books for beginning readers to young adult (YA) novels, and also include a few titles aimed explicitly at adults.

Some may be familiar with Pinkwater from his appearances on National Public Radio. In the late 1980s and early 1990s, he did regular commentaries on All Things Considered, later published in two volumes: Fish Whistle (1989) and Chicago Days / Hoboken Nights (1992). He still occasionally reviews children’s books on Weekend Edition Saturday. Pinkwater’s radio commentaries are sprinkled with his wry, often deadpan humor and bizarre imagination, but if you only know his short radio pieces, you have not been exposed to even a tenth part of his genius.

It is Pinkwater’s young adult work that I wish to praise here. Pinkwater’s YA books are a comic blend of fantasy, science fiction, and surrealism, grounded in his own youthful experiences. Recently, I read Pinkwater’s four most recent YA novels: The Neddiad, The Yggyssey, Adventures of a Cat-Whiskered Girl, and Bushman Lives. These four books are linked by a series of overlapping characters and situations and have connections with many of his earlier works. They are also, I’m pleased to report, comparable to his best earlier YA books, such as Lizard Music, Borgle, and the Snarkout Boys series.

The Neddiad (2007) is set in the late 1940s. Young Nedward Wentworthstein (Pinkwater has a habit of tacking “-stein” onto goyishe names like Wentworth—perhaps as a sort of reverse Ellis-Island process) and his family travel from Chicago to Hollywood on the Superchief because Neddie and his father want to eat at the Brown Derby (“the Hat”). During a stop in Albuquerque, Neddie visits the Indian Building, a tourist attraction/museum next to the railroad station, where an alleged shaman named Melvin gives him a carved stone turtle fetish, advising him to take care of it and not let anyone take it away from him. It will probably not surprise the reader to learn that someone soon tries to do just that. Neddie gets off the train again in Flagstaff, Arizona, but fails to get back on in time, and so is forced to put up for the night at the Monte Vista Hotel, where he meets a ghost (Billy the Phantom Bellboy), in addition to swashbuckling movie actor Aaron Finn and his son Seamus. Neddie completes his trip to California with the Finns and Billy in Aaron Finn’s Packard convertible, with stops at the Grand Canyon and the Scorched Lizard Café.

Arriving in Los Angeles, they find Neddie’s family ensconced in the Hermione Hotel, a relic of the silent movie era. (My wife, who grew up in Hollywood, thinks the Hermione is based on the Trianon http://goo.gl/maps/5WJra). The Hermione is filled with ghosts. It is also the home of young Yggdrasil Birnbaum (call her Iggy at your peril), daughter of golden-age cowboy actor Captain Buffalo Birnbaum. Iggy is a tough, resourceful, streetwise girl who has a passkey to all of the rooms in the Hermione, many of which have been sealed up since the 1920s. We soon learn that Neddie’s turtle fetish has great power and that its keeper may be called upon save the world from some nameless catastrophe. It is no spoiler to tell you that Neddie does, indeed, save the world with the help of his friends and the sacred turtle (it says so on the book’s cover) but how and from what he saves it, I hope you will read for yourself.

In the Yggyssey (2009), Iggy Birnbaum takes center stage. It seems that the ghosts that inhabit the Hermione Hotel and greater Hollywood have been disappearing. Iggy sets out to discover where the ghosts have been going and follow them. Following the lead of her best friend, a ghost rabbit named Chase, Iggy, accompanied by Neddie and Seamus Finn, takes a trip down an elevator to another existential plane. There, in New Yapyap City, they meet Big Audrey, a girl with cat’s whiskers. Audrey lives with her guardian, Uncle Father Palabra (“Your uncle is your father?” “He’s my uncle and he’s a retired monk.”) Audrey joins the others on a quest with two purposes: to find the ghosts, who are attending a supernatural wingding at the Devil’s Shoestring in Old New Hackensack (not in New Jersey), and to free the region from the oppressive rule of “Uncle”. The quest achieved, Big Audrey joins Iggy, Neddy, and Seamus on their return to our own existential plane.

In Adventures of a Cat Whiskered Girl (2010), Big Audrey, wanting to see more of her new existential plane, leaves her friends in Hollywood and catches a ride east with Marlon Brando. Brando talks incessantly, plays bongo drums while driving, and lives exclusively on health foods, punctuated by occasional whole chocolate cakes. Audrey, tired of Brando’s antics, bails in Poughkeepsie, where she gets a job at the local UFO bookstore. She soon befriends two temporary inmates of the local insane asylum, Professor Professor Tag (he’s a professor—of classical accountancy—and his name is Professor) and Molly the Dwerg (Dwergs are a dwarfish race that live in the Catskill Mountains and are best known for slipping a mickey to Rip Van Winkle).

Audrey, Molly, and the professor discover a deserted Dutch-colonial-era house called Spookhuizen or the Vliegende-Schotel mansion, which is regularly visited by unidentified flying fuzzballs (they come on Wednesday evenings to get apple fritters). The house itself has the curious property of moving about and seemingly slipping in and out of existence. Seeking further information about the house and its visitors, they visit the local wise woman, Chicken Nancy, who is 114 years old and the daughter of a slave (slavery, we learn, was not abolished in New York until 1827). Chicken Nancy shows them a portrait of Elizabeth Van Vreemdeling, a former resident of Spookhuizen who vanished more than a century earlier. She is a dead ringer for Audrey, cat whiskers included. Is Audrey the missing Elizabeth or her doppelganger? What are the flying fuzzballs? These are the mysteries that Audrey and Molly must solve, with the aid of an undersized giant named Harold, a clan of Hudson River Trolls, and the Wolluf, the most powerful and frightening supernatural being in the valley (“and that’s without half trying”).

Bushman Lives (2012) is set in the Chicago of Pinkwater’s youth, the scene of many of his earlier YA novels. Longtime Pinkwater readers will recognize it as the model for “Bacongburg” in the Snarkout Boys series and “Hogboro” in Lizard Music. The central characters in Bushman Lives are two teenage boys, Harold Knishke and Geets Hildebrand. Bushman is a famous gorilla who lived the Chicago Zoo, and died in 1951, before the opening of the story (at least according to conventional belief), but he lives on in spirit for Harold and Geets, who toast him with Guinness and bananas.

After being fired by his flute teacher for being a hopelessly untalented musician, Harold wanders the streets and stumbles upon the Art Institute of Chicago. A girl on the steps advises him to go inside and look at de Kooning’s Excavation, which he does. As she predicts, it does things to him. Back on the streets, a series of coincidences leads Harold to a life drawing class. Harold comes to believe that he might want to be an artist. While sketching on the lakefront, he meets a short woman with a huge dog—it’s Molly the Dwerg and the Wolluf (“He didn’t always look like this, like a dog. It just amuses him to do so.”). Molly introduces Harold to Victor (another character who long-time Pinkwater fans may recognize). Victor is the caretaker of a strange house that is much larger inside than outside. Later, Molly finds Harold a mentor, a crusty older artist named Golyat Thornapple. In the course of the story, Harold learns many important lessons about art, artists, and the art world, not all of them happy ones, both from Thornapple and from his own experiences.

Meanwhile, Harold’s friend Geets enlists in the Navy but is discharged because of his proclivity for climbing buildings on the Naval training base. He goes camping in the dunes along the lakeshore, where he meets some unusually robust and tranquil people, who advise him to pursue a career as a spoon bender. Eventually, Harold and Geets reconnect, and set out on “a voyage of great adventure.” Again, Pinkwater fans will probably recognize the destination of this voyage, as well as some of their fellow passengers, but I hope Pinkwater will give as an account of the voyage in a future volume.

This entry was posted in Literature, Pinkwater, Young Adult Fantasy. Bookmark the permalink.